Home » Caring for Canes for 43 years

Caring for Canes for 43 years

Gayle Sheeder has worked at the University of Miami for the past 40 years. Sheeder currently works in the Dean of Students Office.

Working at the department of student affairs at the University of Miami has its perks, and Senior Administrative Assistant Gayle Sheeder would know; she’s been there more than 40 years.

Witnessing every type of music act to come through UM from Santana to Damian Marley is just the start of the mental scrapbook Sheeder has made over the years.The only problem she has now is where to start telling her story.

Seated in her office with her numerous awards hanging on the wall and her Iron Arrow Honor Society jacket hanging from her door, she would rather talk about her relationships with students over the past years.

“I first came to Miami and took a job as a salesperson,” Sheeder said. “But I’m not much of a salesperson, I’d rather work directly with people in a job that allows me to help them.”

When Assistant Dean of Students Dayle Wilson first met Sheeder, Wilson was a work-study student. She recalls memories that highlight her helpful and caring personality.

“I remember one day it was pouring down rain and we were leaving the office after work. We walked outside to see this poor international student holding a wet map trying to find her way to her apartment,” Wilson said. “Gayle walked right up to her and told her ‘It’s ok, you can trust me,’ and took the girl in her car to her apartment, which was right around the corner.”

In her 43 years of working at UM, Sheeder has seen many changes not only in the administration, but also in the school’s reputation, stature and structure.

Sheeder began working at the university in 1966 during its ‘Suntan U’ years as an hourly staff associate secretary for the Director of the Student Union Norman Whitten in the University Center. She never really minded the reputation, however, because she was too busy enjoying it herself.

Later on, Sheeder decided it was time to take advantage of one of UM’s perks for employees and she finished her degree using tuition remission. She began studying for her degree back in her home state of Oklahoma and attended Oklahoma University as an accounting major; at UM, she completed her education with a degree in business. There were few women interested in business during her time as a student, and since those early years, she has seen the program grow to openly welcome women.

Another change Sheeder witnessed was the historic recruitment of football player Ray Bellamy, the first African-American student-athlete at UM in 1968.

She also recalls seeing the emotion and passion of student protesters during the Vietnam War through the windows of the UC. At one time she says there were 15,000 students on the Rock protesting, roughly the size of today’s student body.

After 43 years, it is a wonder that Sheeder continues at the same rate she started. Christine Ferras, an administrative assistant and co-worker of Sheeder’s, has an idea of how she keeps up with the job.

“She’s always just so upbeat. She drinks Diet Coke and eats brownies for breakfast; she could be onto something there,” she said.

Along with her many awards and recognitions, a special sandwich at the Rathskeller is named in her honor, “The Sheeder Grilled Cheese.”

Ultimately, one thing has remained constant in her life: her love for her job and her desire to always have the best interest in mind for students. Sheeder may retire from her position, but her legacy will live on through her involvement at UM.

“I think it’s important to stay involved. I go to concerts, I go to pep rallies,” she said. “I just love it here.” 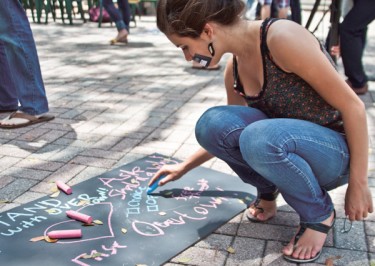