Point guard Malcolm Grant runs down the court during the game against NOVA last Monday at the BankUnited Center.

Grant even questions himself to add more fuel to his motivation to perform to the best of his capacity. He uses the reverse psychology approach.

“He’s a complete point guard, very talented,” head coach Frank Haith said. “He is like an old-school player. He is a leader and has great command. He is vocal and I love it.”

Off the court, Grant spends his time watching comedy movies featuring Martin Lawrence, Eddie Murphy or Bernie Mac. Grant truly loves watching the television show Martin and eating jerk chicken, a few acts that humble him all the time. To keep his mind busy and active, Grant spends as much time as he can on word find puzzles.

Growing up in Brooklyn, N.Y., Grant had a basketball in his hands at all times.

“Basketball is in my family,” Grant said. “My brothers played and my father bought me a Fisher Price hoop so I would play in the house all day.”

That Fisher Price hoop eventually turned into an official 10-foot hoop, where Grant excelled and then received a scholarship to Villanova though Miami was recruiting him.

At Villanova, Grant drew national attention on ESPN as a freshman when he scored 18 points in the final seven minutes of a 21-point comeback victory over LSU.

With Villanova having a crowded backcourt, Grant transferred to the Hurricanes.

After sitting out last season because of NCAA transfer rules and seeing his former school go to the Final Four without him, Grant is determined to succeed.

The Hurricanes (2-0) opened their 2009-2010 season in impressive style this past weekend beating North Carolina Central and Nova Southeastern by an average of 40 points each.

The competition gets tougher as they head to South Carolina for the Charleston Classic Thursday to play Tulane at 1:30 p.m.

Lelan LeDoux may be contacted lledoux@themiamihurricane.com. 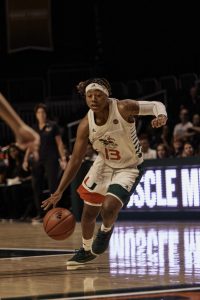 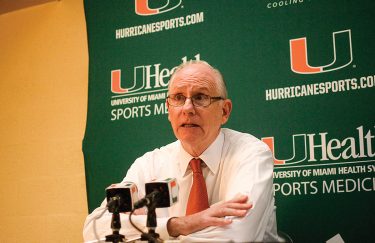