“FEC, Pri, Pi, Pi!” Students that attended any one of the 2009 Homecoming events were sure to hear this infectious chant.

Perhaps at the time some students did not know where it was coming from or even what it meant, but on Saturday at the Homecoming football game, when the Federation of Cuban Students (F.E.C) was dubbed “Most Spirited Organization,” they could finally put a face to the high-pitched chant.

This chant is the sound of their whistles.

The Federation of Cuban Students was started in 1967 to unite those of Cuban culture but currently has members of all nationalities.

The organization participated in all the Homecoming events, ranging from Alma Mater, in which they placed 2nd to Organized Cheer and the community service event Hurricanes Help the Hometown.

“During Homecoming, FEC really tries to put an emphasis on spirit. We make sure as an organization that we support everyone else because it’s not so much of a competition for us as it is being a Miami Hurricane,” said Ricky Fernandez, a senior majoring in exercise physiology and President of F.E.C.

Throughout the course of homecoming student members of the organization attended events adorned with hand-made crowns, carrying orange and green maracas, blowing in rhythm on their whistles and even wearing customized T-shirts.

The title of “Most Spirited Organization”  is based on spirit at the events they attend and also on sportsmanship. There is no exact calculation but the Homecoming Executive committee makes the decision based on their observance at each of the events.

“F.E.C was definitely very spirited when it came to their organization; they were also very sportsmanlike and cheered for their color team which was very important,” said Christina Farmer, a junior  and vice-chair on the Homecoming Executive Committee.

The title is not to be taken lightly. In fact, since the first day of fall semester, F.E.C. anticipates the announcement of the Homecoming theme. Then, it’s crunch time; everything must be organized and there is even an appointed chair to head all preparations from float building to blood donations.

“Nicole Collazo, FEC’s Homecoming Chair, did a fantastic job leading FEC and all its members to spirited victory. FEC has been working very hard since the beginning of the semester in preparation for Homecoming. Once we found out FEC’s theme for each event, we went right to work in making it the best it could be,” said Maury Abascal, a junior and vice-president internal of F.E.C.

Above all the competition, however, what is Homecoming really about?

“It’s a feeling of being part of something greater than yourself. It’s the heart-stopping drums of the Iron Arrow Honor Society. It’s every finger held up high in reverence of our Alma Mater. It’s the sense of belonging you feel when surrounded by others who proudly wear orange and green. That was the true meaning of homecoming for me: an exhibition of a community united in fellowship. For this, I am proud to call myself a Miami Hurricane,” said freshman, Natalia Macias

While F.E.C was honored to obtain its new title, at the close of Homecoming festivities I’m sure even their rivals would agree: it’s great to be a Miami Hurricane. 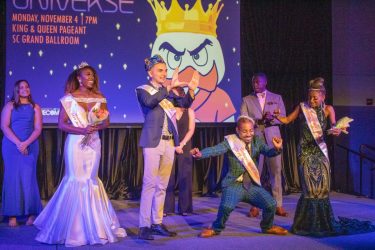