According to Brown University Health Services, college students are among the most sleep-deprived people in the country. The students of University of Miami’s Up ‘til Dawn organization, which raises cancer research funds for St. Jude Children’s Research Hospital, challenge their peers to put those extra hours toward a charitable cause.

Up ‘til Dawn’s major fundraising event is the annual Letter-Writing Party, taking place on October 27 from 10 a.m. to 11:30 p.m. on the UC Patio.

Student “teams”will come and sign pre-written letters to attract potential donors and compete for prizes for the individuals and teams who raise the most money.  This year, the event is receiving a highly-anticipated makeover, complete with the  theme “Trash Childhood Cancer.” Raffles, spin-wheels, free food and t-shirts, student performances and prizes like a Nintendo Wii all make for a day of charitable entertainment.

Getting involved is simple.

“All students have to do is get some friends together to create a team, go online to myuptildawn.org, search for UM, and register, it’s that easy,” said the organization’s executive director Sara Klaben.

She leads by example, proving it is easy to get involved in the St. Jude efforts.  Following her participation in the Letter-Writing Party during her sophomore year at UM as a transfer student, she rose to the position of Public Relations chair her junior year and is currently executive director.  Just as her sorority sisters sparked her interest in the organization, Klaben hopes to inspire others to join Up ‘til Dawn’s charitable cause.

Each team member’s personal goal is to send 25 letters out or raise $250.   This goal is made easier by the online component, which includes not only an individual and team page, but also an online barometer to track each team’s donations.  The UM Up ‘til Dawn chapter has typically had a 15% return rate, equaling about $30 per letter sent.  They have raised over $88,000 throughout the past five years for child cancer research aimed at finding a cure, with 2007’s record year reaching $24,000. 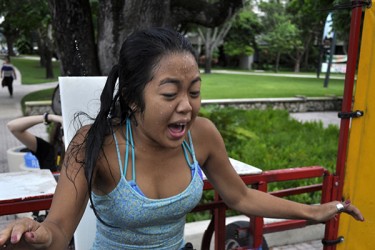