Michael Perchick, Contributing Columnist
The Nobel Peace Prize is bestowed to those who work to promote peace and deter acts of violence. But when Barack Obama, the president of a country fighting two wars, won the Nobel Peace Prize this past week, people finally realized something: saying you want change is apparently the equal of causing change.

Since Obama took office earlier this year, he has accomplished very little. Ten months in office is not a long time to accomplish his goals, so I am not saying Obama won’t meet his initiatives in the future. But as of now, the war in Afghanistan is getting worse, thousands of soldiers are still fighting overseas and the U.S. has basically done nothing to aid those affected by the genocide in Darfur. Not only has world peace not been achieved, but Obama cannot even get Republicans and Democrats to work together. Before there’s world peace, don’t you think he should be able to achieve bipartisanship amongst colleagues living in the same country?

To no shock, most Republicans mocked the choice of Obama. South Carolina Rep. Gresham Barrett, a Republican and candidate for governor, noted, “I’m not sure what the international community loved best, his waffling on Afghanistan, pulling defense missiles out of Eastern Europe, turning his back on freedom fighters in Honduras, coddling Castro, siding with Palestinians against Israel or almost getting tough on Iran.”

I am not blaming Obama for winning the award. The president even said he did not feel he deserved “to be in the company” of past winners. I have to believe that Obama was not saying that to be humble but genuinely felt it. I will have no problem with Obama receiving the award when he does something to deserve it, but until then, the award symbolizes his popularity, not the “change” he promised us during his presidential campaign.

Michael Perchick is a freshman majoring in broadcast journalism. He may be contacted at mperchick@themiamihurricane.com.

Sustainable U
Our Opinion: A revolt of silence 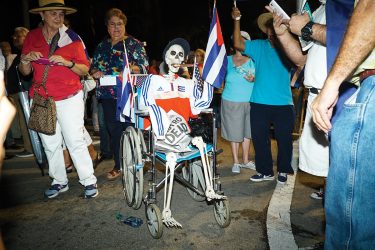