Home » Sazon Festival at the UC

Sazon Festival at the UC

Latin culture was brought to life last Tuesday at the University of Miami UC patio as Hispanic Heritage Month continued with the Sazon festival, a celebration complete with free Latin music and food provided by on campus organizations.

The Hispanic Heritage Month Committee, along with groups like the Alliance of Latin American Students and the Council of International Students and Organizations, prepared the Sazon festival.

“Hispanic Heritage Month is really important just for a showcase,” Senior Thalia Cordon, one of the chairs for the Sazon festival said. “We’re hoping students take the time to celebrate what it means to be Hispanic. That’s food, culture, music, dancing, and colors!”

Cordon and her Sazon staff of over 15 people have been planning this event since last semester.

They decorated the event with red and yellow balloons, ordered food from a Latin family restaurant, La Bamba, among other places, and hired the band Latin Beat to really set the mood with upbeat music that could be heard throughout the UC.

For the day the UC patio made a transformation and became the center of the party.

Students sprawled across the patio raved about the traditional Latin cuisine, which included croquettes and flan, although some shyly admitted that they had no idea what they were eating.

As the event continued a few couples even got up from their seats and began dancing to the festive music.

“This promotes diversity,” Freshman Parker Barnett said. “It’s really cool because I don’t think any other school would have something like this going on.”

Even though volunteers at the event admitted that the heat might have kept some students away, they were very happy with the turnout.

“This is really related to the Spanish culture in Miami,” UM Grad Student Hossein Tootoonchi said. “We have lots of communities here and you can see it.”

According to Cordon those communities aren’t limited to the Cuban culture. The event included volunteers from Salvadorian, Puerto Rican, Guatemalan, and Peruvian backgrounds. 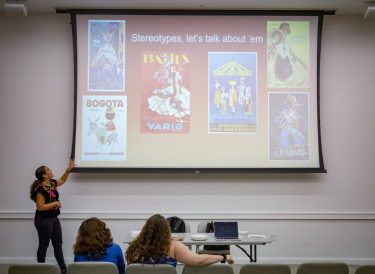