South Florida is widely recognized as a global hot spot for rap and Latin music. However, the same cannot be said about its oft-ignored rock scene. Fort Lauderdale band Ice Cream is trying to change that with their unique new sound.

“We’re trying to create our own genre,” guitarist and composer Tomas Kennedy said. And what genre would that be? “Glam-goth,” Kennedy said.

Ice Cream is almost the complete antithesis of their band. The name Ice Cream conjures images of a bubbly synth-pop 80s band, instead of the lo-fi and fuzzy sound they actually have. So why would they choose the name Ice Cream?

“One day I was walking home…and I said, ‘Jesus I need a band name’ and the first thought that occurred to me was ‘I want some ice cream’,” lead singer Justin Rivers said. At this point an ice cream truck drove by and inspired the name.

Ice Cream has recorded four songs and is currently recording two more. Kennedy’s hypnotic chord progressions and Joel Gutman’s merciless drumming drive their first song, “When Hell Swallows the Kids.” At the halfway mark, the song descends into a full on psychedelic frenzy.

It’s at this point that MPC (a type of drum machine) player Roy Hunter and bassist Alex Lashley excel. Lashley leads the way with a bouncy bass line that keeps the track strangely danceable. Hunter follows with some incredibly eerie sci-fi effects, the likes of which have rarely been heard before in rock music.

A scene in “Poltergeist” in which a hole in a wall attempts to eat two children inspired Rivers’ catchy lyrics. “I wanted it to be a catchy song people could sing to, but then you’d think ‘oh my god, what am I singing to?’”

Although they’ve only been together for around three months, Ice Cream has already garnered a strong following on their Web site, www.myspace.com/icecreamicecreamicecream.

Among these followers is acclaimed underground rapper Dr. Octagon.

Catch Ice Cream playing at the Death to the Sun Festival this Saturday. 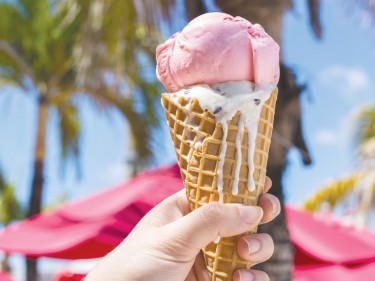