On Sept. 9, Kemy Joseph will have completed one year of sign wearing.

Over this time, the message written across them has stayed simple: You’re awesome. Don’t take life so seriously. Be an inspiration.

The construction of these signs has changed, becoming slightly more complex.

He has gone from gluing two pieces of construction paper together to joining them through lamination; he no longer tapes the sign to his shirt, but hangs it around his neck.

However, the reaction to these signs is far more extreme.

Joseph has been yelled at by a man collecting money for veterans for wearing his “Don’t take life so seriously” sign. The man accused him of not caring about soldiers that have lost limbs in war.

“I know by wearing this sign I am putting a target on my chest,” Joseph said.

One male student approached Joseph while he was wearing one sign that said “you’re awesome,” questioning whether he really could think everyone was awesome.

“Everyone is a great person,” Joseph said. “Some people have just made bad decisions.”

For the most part, everyone’s reaction is much more predictable.

“The first question is usually ‘why do you wear them?’,” he said.

The answer is Joseph’s desire to do something positive. To help someone.

These signs have had this effect. While Joseph was eating pizza in Coconut Grove, a male college student approached Joseph.

This college student had recently broken up with his girlfriend and he thanked Joseph for his sign, saying his messages made him happy during the rough time.

As Joseph took off on a road trip this previous summer, he got the same spectrum of reaction. Some people did not realize his goal and others did.

“In Vegas, the card dealers and people that were dressed stranger than me were giving me odd looks,” he said.

However, as they drove across the country, people understood the signs.

“People we would not normally have gotten to talk to came up to us,” Jack Roberts, a friend of Joseph’s who went on this trip, said. “They understood Joseph was trying to spread love.”

Joseph believes that he is capable of helping other people because of the obstacles he has faced in his life. At 14 his father died, and at the age of 18, his high school girlfriend moved in with him.

Eventually, he wants to make shoes that have “keep your head up” written across them.

On Tuesday, Random Acts of Kindness, which Joseph is president of, will be making signs in Ballroom C. People are encouraged to come and make their own and wear them in celebration the next day.

Joseph sees no end for wearing his signs. He plans to do it for the rest of his life. 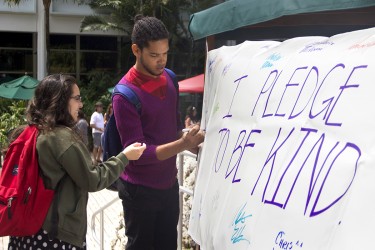 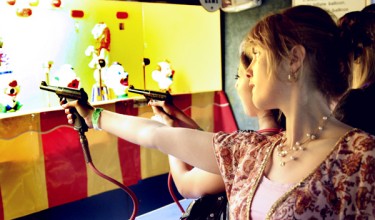