A bland, white warehouse sits quietly nestled on the fringe of Little Haiti. The few cars that pass on the gravel road outside kick up mounds of dust as they pass. The warehouse, surround by a bamboo-like fence, is simple and unassuming. Open the securely fastened metal door and enter Honor Roll Music.

The inside of the local music studio presents a stark contrast to the dingy exterior. It exudes an antique-chic vibe, with a three-piece Victorian sofa sitting comfortably with canvases of colorful modern art adorning the walls of the reception area.

In one of the five studios sits co-founder and co-owner J. Read Fasse. Wearing a purple shirt, khaki shorts and Havaianas flip-flops, he stares intently at a mixing board and two Apple computer monitors, producing what will eventually become the background music to a commercial.

But Honor Roll is so much more than another music studio. According to Fasse, it encompasses “everything you can do in sound and music,” and it’s all housed under the same exposed-concrete roof. The three tiers of the establishment include the record label, music house (which focuses on musical scoring, placements, and syncing) and production team. Creating this all-inclusive business is Fasse’s method of adapting to and succeeding in the changing music industry.

From the founders and staff, to the interns and artists, almost everyone associated with the fledgling company has a deep connection to the University of Miami. It all started in room 107 of Mahoney Residential College, when Fasse and co-founder and co-owner Nick Scapa would score their friends’ student films and produce others’ songs.

“Nick would run down the halls and get people to come in and listen to stuff,” laughed Fasse.

After Scapa graduated in May 2005 with a B.S. in advertising and communication and Fasse graduated the next spring with a B.A. in media writing and production, the two went house-hopping for the perfect location to fulfill their artistic, musical and professional dreams. Having scored the music for a Visa commercial that premiered during the 2006 Olympics, they were able to reinvest the money in the beginnings of Honor Roll. By March 2008, they found the warehouse that would be gutted, renovated and turned into Honor Roll Music.

While Fasse and Scapa lounge in Studio A and answer questions on the history of Honor Roll and reminisce on their time at UM, the local duo Awesome New Republic sits in another room participating in a conference call with mtv.com. Often called ANR, the local rockers have their own studio in Honor Roll and are managed by the company.

Keyboardist Brian Robertson graduated from Frost in the spring of 2005 with a degree in jazz piano performance. He described their sound as a “punk-soul-electronic-hybrid” and lauded Honor Roll on its artistically nurturing environment.

“It’s a great place to create because everyone is on the same page,” he said. “The environment is conducive to making this job full-time.”

The guys at Honor Roll have big dreams. While Robertson jokes that ANR wants to “take over the world,” there’s a hint of seriousness in his voice, and Fasse’s goals for the company certainly correspond to that loaded statement. He said he wants, “our bands touring worldwide, top 10 records, and our scores in major Hollywood movies.” And they’re on the right track to do so.

“There’s a new frontier about to open up and we want to be those pioneers and make an impact that lasts forever,” Scapa said. 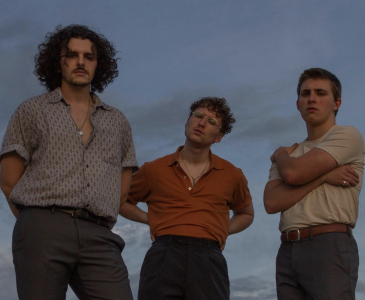