‘Hook’n Up and Gettin’ Some’ tackles dating and sexual assault

“We hoped that Mark would get the message across that the issue of sexual assault is one that affects students,” said Danielle Defoe, a senior on the executive board of No Zebras, a group formerly known as Canes Against Sexual Assault which promotes awareness and reporting of sexual assault. “Like he said, more people are affected by this than we tend to think.”

Tossing chocolate to volunteers, Dawson tackled topics such as how self-esteem affects relationships and how easily body language is misinterpreted. The program centered around how to make one’s “MARK” on the dating game – which stands for eMpowerment, Ask, Respect, Knowledge.

“Poker chips are like self-esteem,” he said. “Those with the highest stack take more chances, don’t feel bad about saying no, and don’t let others get to them.”

“My favorite part of the presentation was when he did ‘Sex on the Beach’ and threw a beach ball around the audience,” Defoe said. Printed on each were several myths and facts about sexual assault and rape. After some ducking and dodging, audience members read the captions aloud.

Although the issues were heavy, Dawson drew laughs from his audience, keeping the seminar upbeat and positive.

Of the possible ways to ask for consent, the idea on the bottom of his slideshow read: “Are you interested in exploring a sexual relationship with me?” Soliciting an outburst from the audience, Dawson continued, “For the intellectual.”

After discussing humorous pick-up lines, the presentation veered to the more serious while Dawson shared his personal experiences and how they motivated him to spread awareness.

“I really appreciated his honesty and how he told his story about his past girlfriend,” Defoe said.

A new approach to the issues of assault and dating, Dawson emphasized that “this is a guy’s issue” – not simply because they are perceived to be the perpetrators, but more importantly because it is the women in their lives that will be affected.

The take-home message was broader than what simply constitutes sexual assault. Dawson addressed preventative measures, such as all the possible ways to say “no” in situations. Giving information and resources, he enabled his audience to offer support to survivors.

Closing, he provided a quote from Marcel Proust: “The real voyage of discovery consists not in seeking new landscapes but in having new eyes.” This was Dawson’s approach, and he left the audience left with a new perspective on dating and healthy relationships, sexual assault and consent.

The next event for Sexual Assault Awareness Month will be Take Back the Night on April 16. It will be hosted at 6:30 p.m. on the Rock. 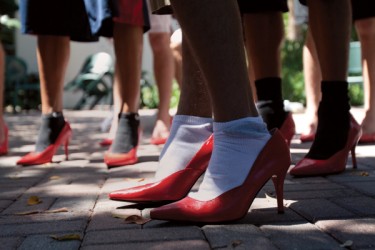