Home » Hanging up the cleats for a pair of business shoes

Hanging up the cleats for a pair of business shoes

You’re watching the Canes game being broadcast from some pit of a college town. Your lone moment of detox from the action come in the commercials. Between the mountains of Coors and a guttural Hemi Dodge Ram spot (did he just say half-ton V8?), a rare NCAA promo appears:

“There are over 380,000 NCAA student-athletes, and most of them will go pro in something other than sports.”

The numbers provided by this public service announcement may seem shocking here in Miami, with our wealth of professional athletes. A lazy dip in the pool recalls the murals of our Olympic swimmers and divers, who broke records and their bodies en route to athletic immortality. The baseball team alone lost eight players to the Major League Baseball draft after a stint in Omaha last year.

What can be more shocking, however, is making the transition from being the “big man on campus” to starting off at the bottom of the corporate ladder.

That is why the athletic department, in conjunction with Toppel Career Center, created the Life Skills series of programs. Recently, senior athletes attended a talk entitled “Beyond Sports,” intended to kindle ideas of life post-graduation. They were also taught about skills that only athletes can offer an employer. One of their brethren was the keynote speaker.

Former UM linebacker corps standout Twan Russell provided anecdotes of life after sports. Now the director of youth and community programs for the Miami Dolphins, Russell stressed the importance of staying active after years of a daily regimen.

After a seven-year journeyman career, he developed a successful mortgage business and charity, the Russell Life Skills and Reading Foundation.

“How am I going to keep up with a college peer who has a seven year head start on me?” Russell asked.

Even for a man accustomed to success, retirement can be a hard fall.

“It was an addiction, the crowd cheering your name,” Russell said. “One day that stuff is going to stop.”

Where once Russell could walk into a swank South Beach restaurant and command a corner booth, he is now relegated to waiting in line with the general public.

However, since athletes are used to working hard for their success, many parlay their skills from the field to the business world. These traits include teamwork, composure and discipline.

“Those are things that the general population can’t see or don’t have the ability to do,” Russell said.

However, many athletes are wary to put sports skills on a resume or do not highlight their mandatory community service while at UM. While they are used to selling themselves to coaches on a daily basis, some are guarded about bringing up sports in a job interview.

Others have trouble with the social adjustment of a day job.

“I change who I am, not to be fake, but to apply to the situation I am in,” Russell said. “Become a chameleon for the environment you are in.”

In addition to the advisors that Athletic Academic Services provides, athletes are encouraged to visit the Counseling Center and Toppel. Pre-doctoral psychology intern Leah Lagos led the Beyond Sports event and also works as a counselor. Her biggest task is normalizing the adjustment process for student-athletes.

Lagos says students often begin to transition from life away from sports in their junior year of college, when career planning becomes a necessity. Since many athletes must stay in Miami for summer sessions and practice, they forgo opportunities like internships and jobs until after graduation.

Members of a high-profile team often have more trouble adjusting to life outside of sports. Many of these players have “stronger athletic identities” than their brethren in other sports, because they have spent most of their lives perfecting these physical talents. The praise that only a packed house can deliver is missed, as are the constant goals the athletes achieve in practice.

They are “not only leaving sports, they are leaving social support,” Lagos said.

Studies conducted by Al Petitpas, formerly of the United States Olympic Committee, found that many deft athletes experience feelings of sadness and anger at what amounts to an uncertain future. Some are afflicted with “symmatic symptoms” near the tail end of their careers. These all-too-real injuries are caused by psychological maladies like stress. A torn ACL is a common example.

Lagos added that preparing for life after sports is the best way to avoid stress and repeatedly referred to the phase as a “normal process.”

For A.J. Trump, that process has already begun. Like many other students, he isn’t exactly sure about what his future plans entail. Trump, the starting center on the football team, graduates in May but has another year of eligibility left to figure things out.

“It’s gonna be crazy,” Trump said. “I’m starting to get a scared feeling.”

Trump, a management major, has been to Toppel “a time or two,” but will not start job-hunting until other commitments are taken care of. Trump is considering opening his own business, football scouting or following in his older brothers’ footsteps and joining the Navy.

His oldest brother talks about dying running through walls covered in scratches, and Trump takes a similar warrior mentality to the end of his football career.

“The vikings say the only way you go to Valhalla is to die in battle,” Trump said.

Playing organized ball since high school, Trump has developed a deep kinship with his Hurricanes teammates that will last well beyond his playing days. For him, football is all about camaraderie. But after playing for so long, many athletes grow tired of grueling and often soporific practices.

Lagos compares sports to peanut butter. At first, peanut butter tastes great and you want it all the time. But after years of eating it, it grows tiresome.

But it is the fellowship of Saturday afternoons that keeps him coming back for more.

Since most student-athletes won’t be playing professionally, they have to prep for the future, just like the rest of us. On the volleyball team, sophomore middle blocker Ariell Cooke plans to be an architect after she finishes a college career replete with blocking, spiking and cramming for design projects. She thinks a misconception exists among her peers on campus.

“They probably think we have this easy, great life. They think we get all this gear,” Cooke said. “It’s a long day, and we’re juggling school at the same time.”

She balanced this delicate act by completing an internship last summer. Although volleyball has opened doors for her, many others remain shut.

She complains about “not being able to be completely part of the college atmosphere. We’re kind of secluded.”

Although sports is a lifestyle for Cooke, she thinks about the end.

“It used to be a really big dream of mine to go to the Olympics, but I think I’ll be okay.” 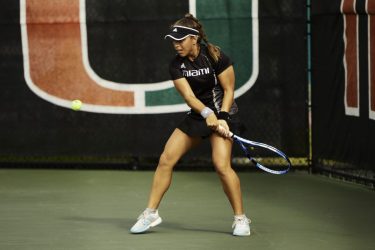