Home » Eaton students venture to the beach…for a good cause

Eaton students venture to the beach…for a good cause

Eaton residents went to Crandon Park on Sunday afternoon to enjoy a day of sun and service.

The trip, organized by Eaton Resident Assistant Melissa Meade, consisted of an educational component at the Biscayne Nature Center, as well as an hour of beach clean-up. Students who participated were given breakfast and lunch, provided by Eaton, and the chance to spend some free time in the sun.

In the nature center, students learned about marine life and were given the opportunity to touch sea urchins and starfish. Afterwards, they went down to the beach and were told to focus on picking up cigarette stubs and bottles.

“It was really nice because the people sitting on the beach kept coming up to us and saying ‘thank you,’” Meade said.

Meade, who is also vice president of the UM Rotaract Club, organized the outing as part of World Rotaract Week. The event was open to Eaton residents and members of UM Rotaract.

“I wanted to make it a fun service project,” Meade said. “In a dorm you have a bunch of different people with different interests. A beach clean-up is fun and not too overwhelming for people who aren’t used to volunteering.”

According to Meade, one member of Rotaract and around 15 Eaton residents participated.

Although Meade described the field trip as a definite success, she said that the turnout could have been higher considering that 400 students reside in Eaton.

Stephen Simbari, a freshman living in Eaton, said the trip was a great experience for him.

“What I really learned was that there is a lot of litter on the beach,” Simbari said. “I’ve littered, I’m not gonna lie. The trip made me more aware.”

Ali Leone, who was visiting Simbari from Quinnipac University in Connecticut, also participated in the trip.

“It was a nice activity for the day,” Leone said. “Touching the fish in the nature hut was my favorite part.”

According to Meade, the trip was not difficult to organize and she had no problem receiving funding from Eaton.

“We learned about animals and did community service,” Meade said. “The Biscayne Nature Center was very accommodating. It was a beautiful, brand new facility.”

Although she said that the turnout could have been higher, she said the outing was a great way for Eaton residents to bond and hopes to do more events like it. 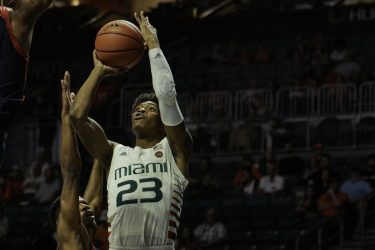