Home » Clothing does not make the man

Clothing does not make the man

Last Friday I went to Monty’s for the first time. I’d been at a pal’s house and I left my dorm earlier that day wearing a sleeveless tee from my middle school basketball team and tight black jeans. Leaving my friend’s house, I grabbed his fedora that was lying around on the table and put it on. So we got in the car and I didn’t think too much about the whole ensemble.

When I got to Monty’s, I ran into a friend. He asked me what I was wearing over and over again, and, with a few drinks in my system and a plate full of shrimp in my hand, I got defensive. He questioned what I was wearing so much that I felt like I needed a full explanation about the clothing on my body. He told me that I couldn’t pull off the “punk rock” look for one day, but rather that it had to be a part of me every day. Even a few days later when I ran into him, he was still stuck on my outfit from three days prior.

I started walking to my next class and couldn’t believe someone could actually care about clothes so much or critique how they reflected someone’s personality. They say that what you do defines who you are, but Across the Universe taught me that it’s who you are that defines what you do.

Though it’s not exactly a direct parallel, the same idea applies to clothing. The clothing I wear, or he wears, or she wears, does not make us who we are. Instead, our moods and our feelings affect the way we dress and it should go no deeper than that.

Clothing doesn’t matter in the grand scheme of things, because in the end it’s all material and all temporary. I can’t even try to lie and say I don’t like to dress up nice – I spent twenty minutes picking out my outfit just to stroll over to the library and write this column – but what I’m wearing doesn’t define me. And at the end of the day, having an extensive wardrobe won’t make my smile any wider.

I know people will still read this and think I’m trying to sound free-spirited or holier than thou, and it all reminds me of a dream I recently had.

I dreamt that I was in a restaurant and, for some reason I was choosing the music for the evening. I remember putting on a song about material things and how they inherently don’t matter. Suddenly I turned back and saw the crowd in the restaurant looking flustered. Their scarves and jackets started to wrap them up ever so tightly and their watches and belts popped off, flying all over the room. A few moments later, I put on an “easy listening” tune and everyone’s attire started to slip back on. Things suddenly went back to “easy living.”

The latest fashions are always cool, but it’s always important to remember that “diamonds don’t bling in the dark,” and even the rarest and most colorful SB’s or expensive dresses can’t be seen when the lights go low. Simply put, it’s important to sometimes step back and ask yourself, like Animal Collective’s Avey Tare, “Am I really all the things that are outside of me?” 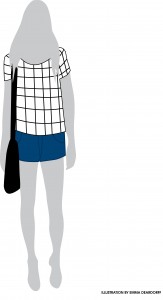