While football has always been my favorite Hurricane team to follow, I actually have more fun at baseball games and have become just as attached to that program over the years.

This past Thursday I was talking with some friends about how excited I was for opening night of the baseball season.

One of my female friends, who will remain nameless, made the following statement:

“We are going to be horrible this year…we have no good players.”

My reaction was one of barely contained fury.

What struck me about it, other than how stupid it was before a single inning had been played, was that her sentiment seems to be shared by so many.

It is true that last season was a special one. The personnel losses that the program sustained were huge, and the players lost will never be replaced.

However, people at UM seem to forget one very important fact: last year’s team fell short in Omaha. As great as they were, they still did not achieve the goal that this program sets at the beginning of every single season: win it all.

My point? Give this team a shot.

Anyone with a pulse knows that this team is going to struggle early on.

Players’ roles, even after the weekend series against Rutgers, will remain undefined for several weeks. Lineups will be tinkered with.

New producers will emerge as old fall by the wayside. Take the Rutgers series for instance:

No one predicted Yasmani Grandal channeling Yonder Alonso. Scott Lawson looked like he’s been here for ages. Iden Nazario was borderline dominating on Sunday afternoon as the starting pitcher.

The truth is, nobody knows what this team can do. There are too many variables.

One thing I do know: head coach Jim Morris does his best work with below-the-radar teams.

In 2001, I became a die-hard Miami baseball fan when I got to be a bat boy at a tournament the team played in in Minnesota.

That team won a College World Series with a collection of scrappy players like Javy Rodriguez and Charlton Jimerson, who got the job done when they needed to.

No one on that team was a superstar. But they won, and they won often.

This team reminds me of the 2006 version.

My buddy John and I watched that team struggle weekend after weekend. However, in the final month of the season, something clicked.

That team ended up in Omaha even though halfway through the season we were worried they might not make the tournament at all.

No one gave them a chance; in hindsight, we all seemed foolish.

I am not saying this year’s team is a title contender.

I, however, refuse to rule them out after three games. 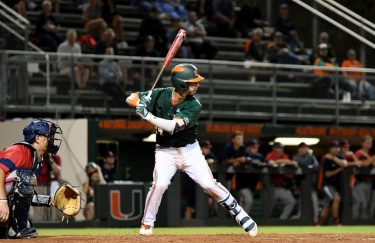