Art that stands for something, art that makes a statement, is what QuantUM Entertainment is trying to make with their theatrical production of Ma Rainey’s Black Bottom. The production will take place in association with Black History Month.

The August Wilson-penned play is “a riveting portrayal of black rage…of racism, of the self-hate that racism breeds, and of racial exploitation. The central conflict stems from the head-on collisions that occur as the artist struggles to define their identity in a society that pressures them to conform,” said directors Kemy Joseph and Xavier Morendo.

At first glance, one might think that this is a play about racism simply between blacks and whites. According to Shaun Brown, the actor who plays the protagonist, Levee, that is not the case.

“In actuality, the play is about the inter-racism of blacks against blacks,” said Brown. “It’s a fight between the idea of moving forward, and clinging to traditions and customs that held people back.”

Brown, a senior BFA acting student, is one of 10 actors, two directors and numerous other crew members who have dedicated countless hours of time and effort to bring this story to life. Each actor has walked away with a different life perspective from the show.

“If there is one thing students should take away from seeing this show, it’s this,” said Shaneequa Cannon, who plays Ma Rainey. “Just because we have a black president doesn’t mean everything has changed. Yes, we’ve progressed much farther since the time of this play, but prejudice still exists not only in the form of racism, but also sexism as well as differences in economic class, and more. We need to continue to be open minded, and to not forget where we have come from. We must understand the past in order to change the future.”

Others see the play as a reminder to students of how good they really have it.

“No matter who you are nowadays, if you’re going to a school like the University of Miami, you’re obviously not that disadvantaged. Everyone always wants to complain about all the stupid stuff in our lives,” said senior Brandon Linkse, whose policeman character represents white society’s view of blacks. “But when you look at it in comparison to the lives these people were forced to lead merely because of their skin color, you should realize that ‘wow, I have it good compared to what they had to go through back then.'”

Ma Rainey’s Black Bottom is part of QuantUM’s effort to bring more thought-provoking pieces to the University of Miami campus. It started with last spring’s productions of I Never Saw Another Butterfly, a play based on real children that lost everything and everyone in the Holocaust. Next month, they will also offer The Vagina Monologues in honor of Women’s History Month.

Ma Rainey’s Black Bottom opens this Wednesday night at 8 p.m. at the Hillel Jewish Student Center on campus. It’s free for all students with a Cane Card. 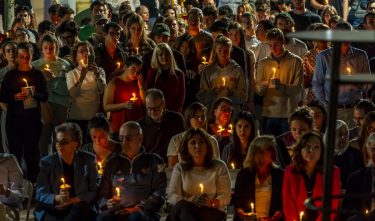