Revamped outfield still up for grabs

One of the biggest questions this year is in the outfield: how can Miami possibly replace a combined 27 home runs, 34 stolen bases, 123 RBIs and an on-base percentage over .400 from MLB draftees Dennis Raben, Blake Tekotte and Adan Severino?

Replacing Raben in right field will be senior Dave DiNatale, who has a flair for the dramatic. Last season he had six game-winning hits and was named the ACC tournament’s Most Valuable Player en route to UM’s first ACC title. However, DiNatale did lead the team in strikeouts. He has been hurt most of this month when he pulled his lat muscle lifting weights, but he says he is 100 percent now.

Florida Christian standout Nathan Melendres, a freshman, will take the reins in center field. Other than Ryan Jackson, he had the best fall practice. Melendres has played infield his whole life and must make the transition to outfield.

“I have been working with [assistant coach] Ray Fuentes,” Melendres said of the adjustment. “Playing center field will get me a lot faster, so that is going to help me. I have talked to Blake Tekotte and he has told me to just relax and play my game just like in practice.”

According to head coach Jim Morris, it will be a coin toss as to who will get the most playing time in left. Look for senior Jonathon Weislow to see some action there. Weislow was predominantly a pinch runner last year. If freshman Harold Martinez is not the designated hitter, he could play left. Junior Jason Hagerty and senior utility man Ryan Perry are also in the mix. In just 11 ACC games last season, Perry compiled a .364 batting average and seven RBI. 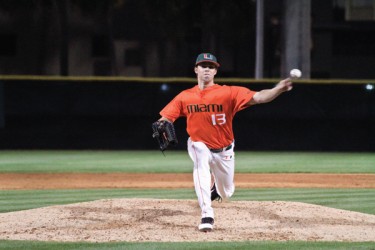