Producer Phil Ramone will be conducting a Master Class this Thursday at 7:30 p.m. in the Victor E. Clarke Recital Hall in the Frost School of Music. The class will be open to the public on a first-come-first-serve basis and is free of charge.

The recipient of 14 Grammy awards, an Emmy, and many other honors, Ramone has worked with a diverse range of musicians, including Billy Joel, Dionne Warwick, Ray Charles, Paul Simon, Quincy Jones, Liza Minnelli, Rod Stewart, Bob Dylan and Luciano Pavarotti. Ramone has been an innovator in both production and the technology behind the music, producing the first CD ever pressed, Billy Joel’s 52nd Street, and was the first to use four-track recorders and apply optical surround sound in movies.

“I would call Phil Ramone the consummate producer of our time,” said Rey Sanchez, the chair of the Music Media and Industry program at the Frost School of Music. “I feel like the depth and the breadth of the work that he’s accomplished is unmatched at this point in time.”

The event is part of the Stamps Family Distinguished Visitors Series, which brings prominent figures in the music industry together with students through performances, lectures and other activities. Last fall, the Stamps series featured visits by composer John Corigliano and jazz artist Joshua Redman.

Ramone said he hopes students get a lot out of the Master Class and promises that no one will be silent during it.

“I come from a school not of Q&A, but of participation,” he said.

Students are looking forward to the Master Class, as well.

“This is the man who produced Dylan’s Blood on the Tracks. I want to hear what he has to say,” sophomore Matt Jones said.

Ramone said he is looking forward to speaking at the university, particularly because he feels the musical world is not in the best shape right now.

“I’ve been a big admirer of UM all these years,” he said, noting that many great artists have come out of the school. “Music always cuts through somehow. Art survives in some of the craziest times. There have never been so many ways to see music, feel it.”

Getting youth excited about music is something Ramone hopes to discuss during the class.

“Young people have the ability to hear and recognize good things,” said Ramone. “Nobody has to tell them what good taste is – I think that’s not necessary in our education.”

Ramone said he hopes students leave his presentation with a deeper appreciation for music.

“You need to use music for your quiet moments, the sad ones, the good ones,” he said. “It allows you to grow, be curious. It’s a gratifying part of your life.”

Dear V: After V-Day love, I want to break it off. When should I say it?
Preseason All-American anchors infield 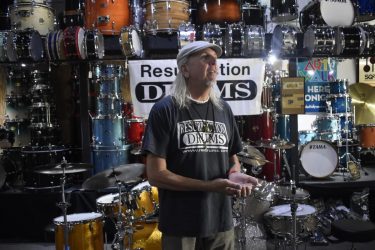