As the 2009 Sony Ericsson Open approaches, tennis fans from around the world will flock to see the sport’s best compete in Miami, Fla.

University of Miami freshman Ignacio Taboada is no exception, though he’s not the average spectator – he plays tennis for the 23rd-ranked Hurricanes (4-2) and tries to emulate his favorite athlete, world No. 1 Rafael Nadal, on the court.

Except for the capri pants.

“I love the guy. He’s a good role model. He’s a very humble guy too, so for me, I just base my tennis on working hard and training really hard every day,” Taboada said. “I really look up to him. It’d be my dream to meet him.”

Taboada hasn’t done too poorly for himself so far this spring season, maintaining a perfect 5-0 record in singles play. In the season opener against Florida Atlantic, he clinched a 4-3 victory in a three-set battle.

With seniors Daniel Vallverdu and David Rosenfeld – who occupied the team’s first two singles positions – absent due to injury, the 6’1″ Atlanta, Ga., native has helped fill in the gap and lighten the load on his teammates.

All this comes from a kid who didn’t start playing the sport until he was 11.

“My parents were playing and they kind of just handed me a racket and were like, ‘try this out’ because I was playing soccer up until then,” said Taboada, who used to play midfielder because he liked to run. “I just started playing and I loved it.”

At one point, he was rated as high as 150 in the International Tennis Federation rankings and won five national tournaments.

With his success, word began to spread about him, and UM’s program was more than interested.

“Just in recruiting him, when you watch Nacho play, he’s an amazing player to watch,” assistant coach C.J. Weber said. “He has a lot of energy and a lot of intensity on the court so that’s obviously initially what drew us to him. When we got him on campus, he immediately fell in love with the school and it sort of worked out on both ends that way.”

“Nacho,” as his teammates and coaches endearingly refer to him, tries to flush away previous points – whether good or bad – to keep himself focused on the court. He’ll grab his towel, which is always within close distance, or briefly talk to himself.

“I’m superstitious. At a tournament, if I eat something that morning and I win, I try to eat the same thing every morning,” Taboada said. “If I put my bag on one side of the bench and I won the last match, I’ll try to put it on the same side.”

Besides pursuing a career in professional tennis in the future, he also plans on putting good use to his marketing and finance education at UM.

“Ignacio demonstrates an unbelievable amount of maturity on the court for his age. He’s really an amazing leader on the court, he’s a good example for all of his teammates and everybody around him,” Weber said. “A lot of people just see his results, but they don’t see the hard work, focus and determination that he gives every single day. Every single practice, every weight session, every conditioning session, it’s 100 percent with him.”

If Taboda continues to ride the streak he’s on, the first encounter with his idol could very well come on the court as an opponent.

Our opinion: ‘Don’t hate – participate’ for Valentine’s Day, lover or no
Valentine’s for the lovers, Festivus for the rest of us 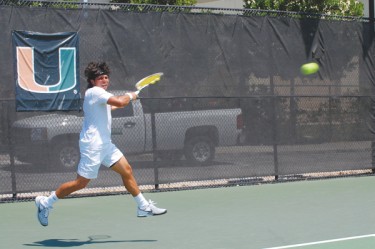