Each Wednesday night, a loyal crowd assembles outside the Cosford Cinema. Both members of the Cinematic Arts Commission (CAC) and fellow students look forward to a break from their busy schedules by engrossing themselves in the films shown at the campus theater. However, the number of students taking advantage of these free screenings is not as high as it could be.

Some find the weeknight showings to be a challenge. Between academic commitments, club meetings and work obligations, students are either unable to attend because of busy schedules, or are frustrated to find the later showing filled to capacity. To make it more convenient for students, the CAC and Blyth Daylong, an assistant to the dean of the School of Communication who schedules and books the films, have coordinated their efforts. Additional weekend showings have been added to the Cosford schedule.  As Scott Sandefur, chair of the CAC, explained, “We’re giving students more opportunities to see the movies we have.”

“We hope to increase attendance for the weekends, especially since CAC pays to have the movies free to students on the weekend and they are usually very good movies,” Sandefur said.

The films to be screened this semester comprise an interesting lineup, including Bolt and The Wrestler.

“We even got a documentary in there somehow,” Sandefur added with a laugh.

Members of the CAC choose the titles to be featured each semester.

“We bring all the films eligible to the list, ones between their theatrical and DVD release, and also a classic or two. We make up ballots with all the movies listed and take a vote to eliminate about half. Then we just keep voting until we have the right number of movies to fill the schedule,” Sandfeur said. This semester, there will be 12 different movies shown at the cinema.

“It’s fun and convenient to just go to a movie with your friends right on campus,” junior Nadja Koch said. “I think the new encore schedule is a really great idea because it just gives us a lot more options as to when we want to see a movie. Wednesday nights can be really busy for a lot of people, so I think these new weekend screenings are great.”

Of this semester’s movies’ varying genres, Sandefur said, “We show what the people want to see,” though only club members can vote. “We have a lot of film people, so that’s why we sometimes tend to show more artsy movies. We want to show a movie that the most people will turn out for.” However, he says that all are welcome to the CAC club meetings, and invites students to “just come in and say hi.” As long as members have attended at least one CAC meeting, they are eligible to vote for the following semester’s movie lineup.

While some students may find the new release films most enticing, Sandefur remains “jumping off the walls excited for Fight Club, the last movie of the semester. I just like the movie. It’s really one of those movies that had a huge cultural impact. But I’m excited for [all of the movies this semester], there’s not a bad one in there.”

For more information on the Cinematic Arts Commission and the Cosford film schedule, students are encouraged to stop by the Hurricane Productions office (UC206), or visit the CAC Facebook Group.

UM gears up for another year of SportsFest
Restaurant Review: The Original Daily Bread Market 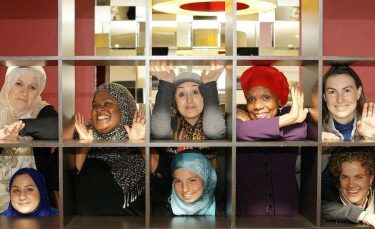 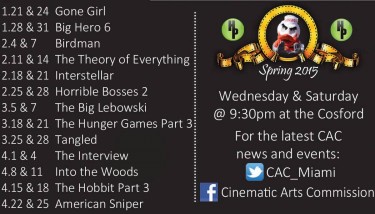