Hundreds gathered outside the Miami Beach City Hall in protest of anti-gay legislation Saturday, an activist effort that began with a few University of Miami seniors, professors and the help of Facebook.

“We were unhappy with how few protests Florida had compared to California,” said Kelley Tighe, a UM senior and president of the UM chapter of the National Organization for Women’s Campus Action Network (NOWCAN). Proposition 8 in California, similar to Amendment 2 in Florida, ensured that marriage is treated as a bond between a man in a woman. In contrast to California, Florida reaffirmed its stance, instead of overturning a current policy.

Concerned with the lack of protests taking place in Florida, Brenna Munro, a professor in women’s studies and the English department, looked to Facebook to speak her mind.

After writing a post entitled, “Where are all the gay rights protests?” Munro created an event page. She was pleasantly surprised with the response. Six days and several sign-making parties later, UM students, along with numerous supporters from the greater Miami area, were on the street.

“The impact of the Internet is just amazing,” said Lorena Fiori, a UM senior and the vice president of NOWCAN.

“We started a Facebook page, and things started happening. It was collective and spontaneous,” Munro said. Within the course of the week, Munro and her students had 600 confirmed attendees and 600 “maybes.”

The Miami Beach rally was part of a simultaneous nationwide demonstration, Join the Impact. A projected 1 million people were expected to gather in over 300 cities in all 50 states.

Tighe, a Miami Beach native, contacted the Join the Impact organization and added another location to the map.

At 1:30 p.m., inspired crowds brought rainbow posters and a vision of equality to 17th Street in front of the Miami Beach City Hall. Cheering, chanting protesters carried signs reading, “My civil right is not your decision” and “Shouldn’t the pursuit of happiness include marriage equality?” Passing cars honked their horns, followed by even louder cheers from demonstrators.

One opponent of gay marriage was present. On the opposite side of the street, he carried a sign that read, “Repent and Jesus will make you Holy.”

The rally featured a Kiss-In, where demonstrators could be free to love whoever. “You need to show your love! 1… 2… 3… go!” said a protester, microphone in hand. Couples throughout the crowd kissed and cheered.

Following was an open-mic session for participants. Munro called two Michaels to the stage. The couple announced that they had just gotten married in California. “I got a lot of hope today,” shared one.

A young man holding a sign that read “No H8” took the microphone and began, “Dearly beloved, we are gathered here today to discuss human rights!”

The protesters were also led through a “Jump the Broom” demonstration. Historically, jumping the broom was the equivalent of tying the knot when marriages between slaves were not recognized. On the count of three, couples, along with the rest of the crowd, symbolically and publicly joined with their partners.

The event brought many UM students involved in other on-campus organizations out.

“I’ve seen a lot of students that I know,” senior Sara Phillips said. She worked in the campaign against Amendment 2 this semester and helped found a new student group, UM for Equality. “We’re trying to keep the momentum,” she said.

Many joined in after seeing the event on Facebook.

“I got invited, and was like hell yeah, I’m attending,” senior Johweyeh Lowenthal said. “In order for equality to prevail, people need to organize and show others their view – education, organization.”

“I’m looking forward from hearing from the police how many people are here,” Munro said. “We’re not expecting any immediate political changes, but this was an opportunity to express our feelings collectively. We wanted to bring people together so work can begin.”

“We never do stuff like this. We’re just trying to graduate!” reflected Tighe and Fiori. By around 3:30 the crowds had been cleared, and UM students took a last few pictures.

“We thought it would be a low-key afternoon, but that dream was quickly squashed, with all these people!” Tighe said with a smile. 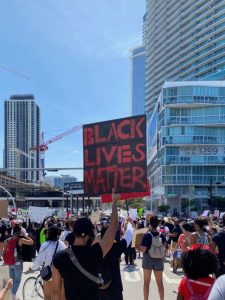