Under the spotlight of ESPN’s primetime Thursday night game, the University of Miami showcased its youthful talent and reemerging presence in college football during its final home game.

Despite a late comeback attempt by Virginia Tech (6-4, 3-3), the Hurricanes (7-3, 4-2) held on for a 16-14 victory to move into sole-possession of first place in the Coastal Division of the Atlantic Coast Conference.

They also improved to 13-1 when playing ESPN’s feature game.

“It was an unbelievable game,” head coach Randy Shannon said. “You couldn’t tell which way it could go. The young guys played well and we did a tremendous job of ball control in the game and running time off the clock.”

Redshirt freshman quarterback Robert Marve threw for 121 yards and gained 44 on the ground, while sophomore running back Graig Cooper rushed for 52 yards.

Miami’s defense held the Hokies to only 70 total yards of offense in the second half, and a season-low 77 rushing yards all game.

“We knew both of their quarterbacks were injured so I knew they were going to start out running,” sophomore defensive lineman Allen Bailey said. “We wanted to stop the run so they would start passing. We worked on our pass rushing last week so we felt our preparation was really good for this game.”

Sophomore kicker Matt Bosher, a semifinalist for the Lou Groza Award, which honors the nation’s top kicker, nailed field goals in three straight possessions after the start of the second half to break a 7-7 tie.

“My protection up front was great and they did a great job giving me time and room to kick the ball,” Bosher said. “Without them, the ball doesn’t go through the uprights.”

For three straight series, the Hokie defense kept the Hurricane red zone offense from scoring a touchdown, which included two trips inside the 10-yard line.

It looked as though the inability to find the end zone would come to haunt the Canes after the Hokies scored a touchdown to make the score 16-14, and controlled possession with a little over a minute left.

On fourth and three, however, Bailey recorded one of the defense’s seven sacks to preserve the win.

“It felt good to make a play and then celebrate the team victory,” he said.

At first, it seemed as though Virginia Tech would have its way against Miami during its opening drive, until the ball was turned over on downs.

UM’s defense awakened, however, as senior safety Anthony Reddick and freshman linebacker Sean Spence combined on a tackle for no gain on fourth and one.

“We knew he [Taylor] was going to be ready to play, but we didn’t know how much,” Shannon said. “When he comes in the game he’s more of a runner and Glennon is more of a passer. We had to adjust the calls.”

The Hurricane offense answered right back with a 12-play, 76-yard drive to take a 7-0 lead in the first quarter on James’s three-yard touchdown run on third and goal.

VT tied the score at seven with 4:54 left in the half on a 14-yard rush by an untouched Taylor.

“I think every team needs some time,” Marve said. “Once you learn how to win, things just keep on rolling. Now we’re trying to fight as a group and fight together.”

Miami heads to Atlanta, Ga. next week to take on Georgia Tech (7-3, 4-3) for its second consecutive Thursday night game, riding a five-game winning streak for the first time since 2005.

“I feel like we’re on the right track,” Shannon said. “These guys are young and tend to feed on anything you give them. With a lot of the guys coming from winning programs, the only thing that matters to them is winning.”

Christina De Nicola may be contacted at cdenicola@themiamihurricane.com 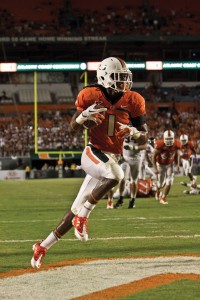 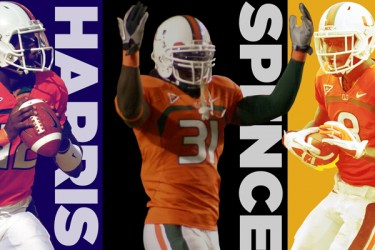