Coming off an impressive season where the Hurricanes played beyond media expectations, the University of Miami men’s basketball team is ranked No. 16 in the preseason ESPN/USA Today Poll.

“It’s certainly some nice recognition of the talent we have on this team and a positive way to start the season,” said fifth-year head coach Frank Haith, whose Hurricanes were ranked as high as No. 19 in the nation last season. “But these rankings don’t guarantee anything. We are going to continue to work hard to ensure we accomplish the goals we have set for ourselves this season.”

The last time the Hurricanes were ranked in the preseason top 25 was going into the 1999-2000 season. That season, the Hurricanes advanced to the the Sweet Sixteen round of the NCAA Tournament.

The Hurricanes open their season at home against Florida Southern on Nov. 15 at 7:30pm. 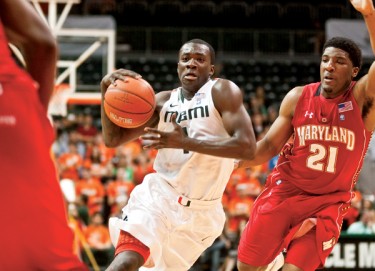