Adderall and Ritalin, prescription medicines to aid people in focusing who have disorders such as Attention Deficit Disorder, are abused as "study aids" by students. Photo by Chelsea Matiash // Hurricane Staff.

With all-nighters, hundreds of pages of reading, massive assignments and countless responsibilities twisted in with just a hint of procrastination and strict deadlines, and you have college students worldwide regularly abusing Adderall, a prescription drug used to treat Attention Deficit Hyperactivity Disorder (ADHD), to cope with high-pressure lifestyles.

Adderall, a stimulant that allows the user to become more concentrated, focused, and in many cases, more energetic, is similar to a more generic version named Dexedrine. Though commonly prescribed for people with ADHD, it does make its way into the hands of unprescribed students who do not need the drug for medical reasons, but abuse the drug to stay alert during tests, late-night study sessions and other academic endeavors.

“I think that sometimes these are the most overstressed people that need the extra concentration the most to deal with the workload,” said Robert, an unprescribed 21-year-old University of Miami Business Law major from Delaware, who spoke to The Miami Hurricane under the condition of anonymity. Robert uses the drug for high-stress scenarios during the semester. When asked whether the drug could be harmful for non-prescribed users, he shrugged skeptically and said, “If used in the wrong manner and abused it could potentially be dangerous.”

Sean, a 19-year-old motion pictures major from St. Louis, Mo., is a prescribed Adderall user who takes other drugs to counter the effects of Adderall.

“I’ve crashed, and sometimes I have to use other drugs to fall asleep because [Adderall] keeps you up,” Sean said, under the condition of anonymity. “Sometimes when I’ve needed to go to sleep and I’m on [Adderall], I’ve had to use other drug.”

Sean said he does not believe the drug is dangerous.

“[It’s] Absolutely not [dangerous]. I think people who abuse it and do lines [of cocaine] with it [are in danger], but a prescribed person taking Adderall in order to help with their work or whatever? I see no problem,” he said.

“How can something that a doctor gives to people be bad for you?” questioned Dean Nanette Vega, director of the Sandler Center for Alcohol and Other Drugs. “These are prescriptions prescribed for those who have been diagnosed with ADD/ADHD. Taking someone else’s prescription drugs is illegal and dangerous. Prescription drugs are not harmful if they are used properly and only under a doctors supervision,” she said. “Many think it’s safe because it’s a legal drug but they tend to overlook a major fact: It wasn’t prescribed to them.”

The center, located in Student Services Building 21, room E, deals with alcohol and drug use, abuse and dependency issues among students.

The drug has few side effects for prescribed users who take the correct dosage. The Food and Drug Administration, however, reports that non-prescribed, illegal use of Adderall can result in “rapid heartbeat palpitations, increased blood pressure, restlessness, insomnia, seizures, depression, headache, and stroke.” Long term affects include liver problems and addiction.

A study conducted at the University of Miami in 2002 by the President’s Commission on Alcohol and Drugs set out to discover patterns of drug use in the student body.

“We didn’t have a handle on what was going on on campus”, said Bryan Page, Sociology Research Center professor and chairperson of the Department of Anthropology. The objective of the study was to find Adderall users through “networks of informal social relations,” whereby students who were working on the project sought out other students who were users of prescription drugs.

“The students who were originally prescribed were the least enthusiastic to take the drug,” Page said.

Those who did not have a prescription were much more eager to take the drug than prescribed users. Non-prescribed students, the study found, would attain their drugs through prescribed students who sold off or gave away the excess pills they would not use.

The drugs that kill the most aren’t heroin, cocaine or crystal methamphetamine. A report released last June by the Florida Medical Examiners Commission found that fatality rates caused by legal, prescription drugs were three times that of all illegal drugs combined in 2007.

So how should students deal with the hardships of a college semester without abusing prescription meds?

“Get at least seven hours of sleep. Make sure you eat three meals a day and drink plenty of fluids. Make a study schedule and plan ahead; that way you are not cramming last minute. Study with a buddy. Utilize campus resources,” said Dean Vega. But, lastly and most importantly, she said that students can find relaxing and healthy alternatives to abusing prescription drugs: “Take a study break and do something fun!”

Obama to campaign on UM campus Friday; will focus on women’s issues
Dear V: Dishonesty about future plans could jeopardize everything 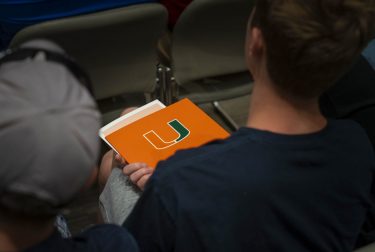 4 COMMENTS ON THIS POST To “College students use, abuse ADHD drug Adderall”