After reaching the NCAA Tournament for only the second time in the program’s history, the Hurricanes’ women’s soccer team continued its success Sunday afternoon at Cobb Stadium.

In the ninth minute, junior Jessica Wyble’s corner kick was deflected by sophomore Lauren Singer to the top of the box for Steinbruch, who let go of a hard shot for an early 1-0 lead.

“She’s a better player and more experienced,” said head coach Tricia Taliaferro of the ACC Freshman of the Year. “She’s able to recognize and read the game. She also has more people to help her and less pressure.”

After halftime, Steinbruch connected on her second goal of the match, in the 50th minute, by taking the ball down the left sideline on a pass from junior Beverly Goebel.

The Canes maintained possession and won battles to the ball for most of the game, until the Hatters applied some pressure late in the second half.

“They stepped up, and they needed to add some extra pressure and be more direct,” said Taliaferro.

Another insurance goal was added in the 85th minute, as sophomore Brittney Macdonald deflected in a corner kick from sophomore Lauren Singer.

With a little over a minute left to play, Alonzo, in her first career match, blocked a penalty kick for her fifth save.

“I was a little bit nervous, but I took it all out the day before,” Alonzo said. “I loved being on the field, and it’s an honor to play with my defense. I’m very excited.”

Alonzo has big cleats to fill, as she replaces Lauren McAdam, the most honored goalkeeper in Hurricane history.

The eighth all-time matchup between the Canes and Hatters was originally set to be played in Deland, Fla., but due to Tropical Storm Fay’s heavy rains and flooding, it was rescheduled for Sunday’s matinee.

“I’m very pleased with the result,” Taliaferro said. “We saw a lot of positives on offense and defense. There are a couple of things that we need to tune up, but I think that comes with playing games.”

Who Makes Up Your News?
Alan Swan, 74, School of Law professor 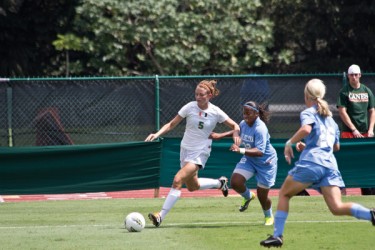 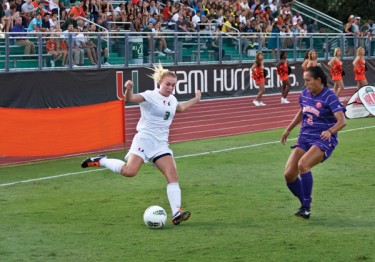