Despite the accolades, Canes baseball team fall short in Omaha HE'S SAFE: Jemile Weeks, who was selected in the first round of the MLB draft, slides into third base during the UM vs Clemson game last season. Weeks was also one of three Hurricane players named to All-America teams. Photo Credit: File Photo

Since the final issue of last semester, the University of Miami baseball team has been very active.

The program set many records in 2008 but it will have a much different look in 2009. As they say, all great things must come to an end.

The Canes advanced to Omaha for the College World Series as the No. 1 national seed. After losing to eventual runner-up Georgia in the first round, the Canes eliminated nemesis Florida State before falling to Stanford and finishing 1-2 at the tournament.

The team produced three first round draft picks (Yonder Alonso, Jemile Weeks and Carlos Gutierrez), a second round pick (Dennis Raben), a third round pick (Blake Tekotte) and a fifth round pick (Mark Sobolewski). On the second day of the draft, Adan Severino and Enrique Garcia joined their teammates in the professional ranks.

Chris Hernandez was picked as Baseball America’s Freshman Pitcher of the Year. Alonso, Hernandez and Weeks were all named to All-America teams, while eight players were named to the All-ACC team. David DiNatale and Ryan Jackson were named to the All-ACC Academic team as well. Kyle Bellamy was a dominant reliever, and freshman catcher Yasmani Grandal flashed the potential to be one of the program’s best.

In all, the team enjoyed tremendous individual and group success, although ultimately, they failed to win the National Championship that they sought.

As the season ended, it was announced that longtime assistant coach Gino DiMare had resigned. Current assistants J.D. Arteaga and Joe Mercandante were promoted, and Barry University’s Ray Fuentes was hired to fill the remaining vacancy on the coaching staff.

Heading into next season, the roster will undergo a major changing of the guard. An offensive juggernaut keyed by Alonso, Weeks, Tekotte and Raben will transition to a pitching-based team that will have to win with small ball and defense.

The pitching staff loses only two major contributors: Garcia and Gutierrez. Thanks to the coaching staff’s recruiting prowess, the cupboard is far from bare, and the Canes look to contend for ACC and National titles again next season, led by pitchers Hernandez, Bellamy and junior Eric Erickson.

The incoming recruiting class includes Harold Martinez, a player that has been profiled by ESPN the Magazine and should step in right away at either third base or in left field.

Fall practice will tell us much about whether the Canes can pick up where they left off last season.

One generation of Miami baseball players has departed, and in their place will come a new group of Canes looking to do what last year’s team could not: win the College World Series.

Steven E. Chaykin, 57, Board of Trustees member
Our Opinion: Minimum drinking age should be lowered to 18 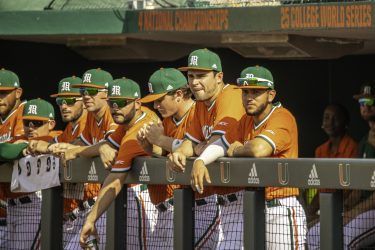